“Uriel’s Revenge is an action, sci-fi story that builds tension and mystery, and then releases and reveals in satisfying and enjoyable ways.”

This review was written by Patrick from Cave to the Cross Apologetics. Periapsis Press is sharing it with permission. I encourage you to check out his website!

Small-time privateers battle ancient terrors at the edge of the Solar System!

For Brian Zaks, developing his skills as a space pilot and combat maneuvers specialist for Elwood’s Privateers took highest priority. But he couldn’t ignore fellow privateer and ex-girlfriend Evvie Evans when she begged him for help with her nocturnal hallucinations of a raven-headed demon.

Then Elwood’s treasure-hunting hobby uncovered the lost secrets of an ancient cult, thrusting Brian and Evvie into an interplanetary clash between the cult’s present-day descendants. Can they defeat a primeval power threatening to upend human civilization?

Uriel’s Revenge is a horror-tinged sci-fi adventure. Read it today and escape to the Cliptic!

A New Hope In Science Fiction

Uriel’s Revenge is an action, sci-fi story that builds tension and mystery, and then releases and reveals in satisfying and enjoyable ways. It almost forces you to continue to read on. The story involves characters who are just trying to make a living in the solar system by salvaging and treasure hunting. What they stumble into is the veil of a hidden world known only to a few but important to all. What starts as treasure hunting for abandon technology turns into the greatest treasure hunt mankind has embarked on since – the Beginning.

All stories have elements of characters, plot, rising action, climax, falling action, etc. Where some authors focus on world building to the detriment of the story or place action front and center with little room to breathe between scenes, Roome balances each element well.

A change in setting allows for characters to reflect or communicate. This enables development and growth, which makes them feel more grounded in reality. They learn from what just happened or look forward to what will occur with the best laid plans. When those plans are put into action, the skirmishes unfold in a realistic way; they are over and done with quickly, and damage is taken and assessed.  The benefit of this is the action tension moves at a great pace without replacing the story. This pacing makes the book almost serialized, and in the space setting, it fits well.

The Expanse Of The Plot

Roome’s ability to tell a good story is clear and imaginative. This is more than just demons in space. The use of biblical imagery builds up the story elements of Roome’s mythos without being the one-to-one knock off that traditional publishing likes to do. For example, Roome doesn’t once use the word “Nephilim” when it would have been so easy to do. Instead, the greater background of the world allows the reader to ruminate on if the creatures encountered in the story have roots in such biblical narratives.

Roome might not include all the details of the book purposefully, but it’s clear the author has the world and background flushed out. This is seen in the well done exposition scenes. There aren’t any cheap “As you all know…” hack scenes we see even Hollywood resorting to. He uses the ignorance of his characters, who are learning about the world they’re entering. The explanation scenes make sense, and we, as the hidden observer, get to listen in. Such expositions also build intrigue and drama, as you’re not always sure whether what’s being revealed is the truth or the full truth. The mixture of exposition, character building, and action scenes makes the story flow and makes for a quick read because you’re riding each of those interesting waves. The book doesn’t need to explain all the details of ship propulsion in 22 pages for us nerds who enjoy that type of stuff, but Roome gives enough detail that you realize you’re in the future and in space, but you can still relate to the story and characters.

Those Who Have The Curtains Pulled Back

The cast of characters we follow through the story are from the future, but they are very normal characters. They’re the same type of characters we relate to even if they’re capturing ghosts with proton packs or running from xenomorphs on a cramped spaceship. They are just regular folks trying to make a living before they stumble into a larger world. This approach makes the entry into the story for the reader occur quickly, since the characters are relatable. Brian, the main character, is the foil for the audience. He’s the new guy who’s trying to figure out how to do his job while finding himself in a complicated relationship – something we all have a lot of experience with in our own lives or with those we know.

When the main story hits, it hits quickly, and the confusion you feel as the reader is reflected in Brian and even in some of his fellow crewmembers. Elwood, Byrd, and Eric each stand out in being normal in extreme circumstances, even if there are special plot points about them. No one is an expert marksman without trying or who’s able to take several bullets to the chest and just yell and continue to run around.

They are also normal because they are good people who have their flaws. Brian becomes involved in a love triangle with Evvie, the special female character that reenters his life to throw a wrench into everything, and makes some wrong choices. He’s not a perfect paragon of virtue, even if you want him to be.

Evvie is no Mary Sue, but she’s not a helpless damsel. She’s the best shot on the team, but has a history of seeing demon-like characters at night in her room. Space demons – how can you not want to read about that? Evvie is someone you understand why Brian wants to be around. She is not a shrill character who slingshots back and forth from loving to emotional, nor are you going to find her shaving one side of her head and calling for the death of all men. She’s a soldier who can hold her own, but she’s just a normal human being – well, except she seems to be an important person in that the secret cabal is trying to use her for their own nefarious purposes.

Christian Fiction Without The Cringe

One of the fun aspects of Uriel’s Revenge are all the little jokes and relatable topics Christians would find entertaining. The different names of ships or conversations characters have on the cessation of sign gifts show these characters to be realistic Christians who have their differences but not to the detriment of their friendship. This helps with separating characters who are already up and running in their world.

In similar fashion, the flaws of the characters, such as engaging in relations outside of marriage or using bad language when the situation makes sense to use it, add a sense of realism to the story. These make them feel like people and not entities who embody the author’s belief of what Christian behavior should always be. It also causes you to not always trust a character, leaving you unable to always guess what will happen next. There are times when I would have thought characters would have made a bigger deal with big revelations like, for example with a small spoiler, when the existence of the soul is confirmed. Maybe in a world where we live on Mars and have to deal with cults of power, those revelations would hit differently.

Roome does so well in the use of Christian motifs in his story. It feels like a very possible “unseen realm” storyline that flows from a world which acknowledges that God is real, and the supernatural has a special relationship with the physical world. Roome doesn’t just take the biblical story of Eden and use it for his own storyline; he builds a world where entities from that world would attempt to recreate an Eden-like power source again and this might not be the first attempt. The book acknowledges God’s ultimate story while setting this story in a futuristic world of spaceships, Mars colonies, and governments who over-reach their mandates for great power control – ya know, “fiction.”

Roome provides some help with some possible character confusion with a flow chart at the beginning of the book. These characters appear later in the book, and I would have to refer to this a number of times. I still got lost at who was who. Those who have experience and enjoy reading family tables in fantasy novels would scoff at my struggle – yet, the story makes clear who I’m supposed to be rooting for or jeering at.

A World Still With Questions

Uriel’s Revenge doesn’t reveal all the secrets of the world and one would expect at the conclusion of the novel for there to be more to the full story – one known only by the author and the Author. Satisfying characters with a great mythos created on the backbone of the Greatest Story Ever Told allows us Christian readers to enjoy reading science fiction again.

While this is a book written to appeal to Christians, this is able to be enjoyed by those who like a world to be built in a single novel with characters you understand why you’re rooting for them. The flow of the book reads like a mini-rollercoaster, and it’s easy to stay up a bit too late at night to get to the next valley to breathe with the characters.

Pick up this book and enjoy reading simply a good story. I read it with a small group of friends which made the discussion of the book just as fun and dramatic as reading it the first time. We got our revenge on Uriel’s Revenge.

Did you enjoy Uriel's Revenge?

Help other readers by leaving a comment below with your own review!

If you enjoyed this guest review, please check out https://cavetothecross.com/

Hard Sci-fi, Reviews, Science Fiction, Sword and Planet
Made in His Image Review 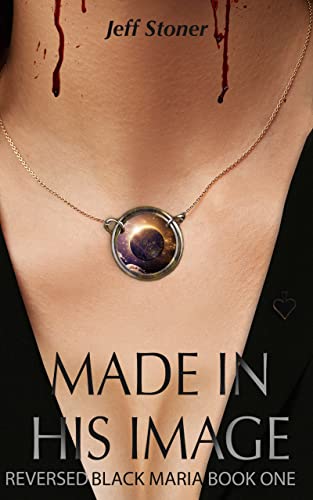