A desperate father must rescue his son when a deadly kaiju rampages across his city.

When opportunists lurk and buildings crumble around him, the battle might be the least of his worries. Each minute means more destruction, and the clock is ticking.

The first in a new kaiju series where the ordinary collides with the oversized, Collateral Damage is based on a short story of the same title originally published in Broadswords & Blasters Magazine. Experience the first taste of this series with a punch to the gut. Mind the shadows — you could be crushed.

Here at the Periapsis Press blog, we only post reviews of works we recommend, so you already know I enjoyed Collateral Damage. I encourage you to check it out!

Disclaimer: We received a copy of this book from the author for the purpose of review. This in no way influences our opinions (You can request a review here.)

Collateral Damage is a high-speed science fiction thriller about a father’s battle to save his son, underfoot of a kaiju/mech battle for humanity’s survival. This first installment of the series is a wild ride of paternal determination and an intense mashup of the ordinary and the fantastic!

While Collateral Damage begins with a simple premise: a father of a broken family doing whatever he has to in order to be with his young son. Initially, the goal is to pass an apartment inspection in order to get visitation rights. The common situation provides a moderate amount of tension, stemming from the relatability of the father-son relationship.

The initial obstacles are likewise of the everyday sort, but the situation quickly goes off the rails. When a kaiju attacks the city and his son is unaccounted for, DeShawn hurdles into an epic quest to find him and keep him safe. He meets with one problem after another, but never gives up.

Furman does an exemplary job of utilizing the “yes, but / no, and” storytelling technique. The consistent complications deny the release of tension, pushing the drive of the story even harder with every event. Furthermore, DeShawn is impacted physically at every turn – a tactic reminiscent of Jim Butcher – which continues to amplify the suspense.

Reading a story told in present tense can take some mental adjusting if you aren’t used to it (generally, it is more common in short stories than genre fiction), but in Collateral Damage, the style is used to further emphasize the immediacy and build the suspense.

The effect is one of careening into the unknown. It is not unlike a Crash Bandicoot game in which the character runs full-tilt towards the screen; the player is perched on the edge of his seat, reacting to problems seconds after they appear and trusting that there is a way through to the finish line and to victory.

The fast pace and intense emotional investment do not prevent the setting from making an undeniable impression. Images, such as driving a blue convertible through a mech’s legs as it battles a giant monster overhead, stick with you.

Some of the descriptions are quite graphic, emphasizing the “collateral damage” occurring while the battle rages above. The destruction, violence, and even gore further contribute to the rising tension by reducing the control the reader perceives the main character as having.

But it also casts some thematic threads.

The story works off a simple premise, and the central theme reflects that. The importance of a father figure and the desire for a whole and loving family are threads that lead to the payoff, the feel-good ending the reader craves like water after a gut-wrenching race.

However, there is another theme, more timely than timeless.

There are political events occurring in the world that are intriguingly similar to our own current events. Zenith, a communist group of zealots works to overthrow the mechs, the force established by the government to defend the people.

Zenith has occupied part of the city, obstruct roadways, accost ordinary people on their way home from work, steal and kill, and take advantage of a bad situation to further their own goals. However, they have some valid concerns, including the blasé acceptance of the damage caused and lives lost as a result of the mechs’ battles, and the impunity of the mech pilots for their behavior. Most people seem to love them, though, and watch their battles as a kind of entertainment.

In this situation, DeShawn is once again painfully relatable. He does not mindlessly embrace the mechs, forgiving the carnage and rejecting all criticism of them, and so he is himself rejected by others as “anti-government.” One character even goes as far to call him a monster for his mere opinion. However, he also cannot accept Zenith who stole his wallet, appropriated his apartment, and killed the people he approached for help. As a result, he is labeled a “patriot” by them.

He, like so many people in the Western world today, finds himself in a no-man’s land, disavowed by opposite ends of the spectrum as the enemy, and denied the opportunity to find common ground with either of them due to the labels they are so quick to brand him with. He represents the “collateral damage” in this political and cultural war.

The thematic arc resolves with DeShawn’s conclusion that he is happy that the mechs exist. This is not a surrender of his inhibitions regarding them, nor an inconsistent, emotional response to his rescue. It is a nuanced discernment of the good and the bad, one that has been denied to him throughout the story.

I am reluctant to pin any particular, deeper message onto this thread, any call to action regarding our own world’s politics. But the story clearly cautions against the adoption of an “us vs them” mentality, and the satisfying ending is really only possible because DeShawn lets go of some of his own judgement towards his ex and his father, enabling them to become a whole family instead of one divided against itself.

Collateral Damage is an exciting kaiju thriller with a breakneck pace that will keep you up late reading it and thought-provoking themes to mull over for days afterwards! I am looking forward to seeing where Furman takes this series. 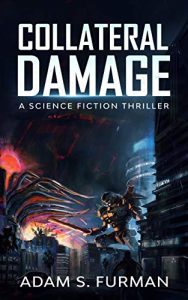 Review: Pirates of the Electromagnetic Waves