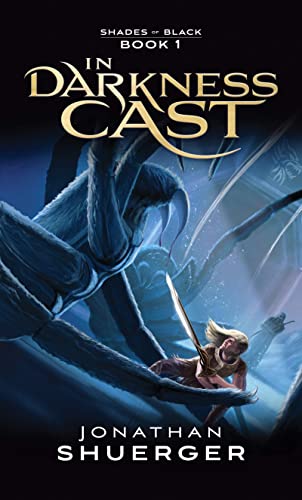 In Darkness Cast is a driving sword and sorcery novel about a hero who prays for help and receives an all-powerful – and evil – sorcerer from another world in answer. Featuring vikings, cannibals, demon spiders, and a nearly indecent indulgence in the gory dismemberment of evil’s minions, the Shades of Black series launches with this first installment.

Here at the Periapsis Press blog, we only post reviews of works we recommend, so you already know I enjoyed In Darkness Cast. I encourage you to check it out!

When Hell’s legions invade his homeland, a desperate warrior turns to the only mentor he can find – a bitter champion of the Everlasting Dark.

Gideon Halcyon wants nothing more than to save his people from the forces of Hell. Demons and cultists run roughshod over his home, slaughtering and sacrificing to a trifecta of fallen angels on the cusp of destroying the kingdoms of Man. Hope seems infantile in the face of extinction itself…

Coming from the Void beyond the world, Ashkelon alone survives the world he left in ruins. Cynical and ruthless, the dark sorcerer seethes with millennia of hatred, and his cursed sword Acherlith shrieks with the last screams of a thousand failed heroes.

Ashkelon makes Gideon an offer – to train him to be a hero of the Light beyond the failures sealed within his blade, a peerless warrior exceeding even the exacting standards of the Everlasting Dark. Reluctantly, Gideon accepts, and is thrust into a world of infinite cruelty under Ashkelon’s black fist where the slightest misstep will see him dead at the sorcerer’s hand.

As Hell consumes the hopes of Man, a hero is forged in Darkness.

In Darkness Cast sets a rapid, tension-driven pace early on. The characters, particularly the hero Gideon, are proactive and their decisions push the story forward. Each event builds on the last, usually in direct reaction to the characters. These consequences keep the reader engaged, even when dialogue replaces the physical conflicts.

The fight scenes are particularly fast-moving and detailed. Gideon and his allies are up against evil monsters and crazed cultists, so Shuerger doesn’t hold back. There is a considerable amount of gore to punctuate the righteous battles.

A simple, clear motivation defines Gideon. His desire to be a hero intersects with his regret that he could not protect his adoptive mother. This is a pleasant distinction from the common revenge trope, which caries so much baggage with it. Instead of negative emotions, Gideon is measured by his noble goal and a generous heart. These make him relatable and the reader can root for him whole-heartedly as he cuts down evil with abandon!

It is also noteworthy that Gideon’s desire to be a hero does not fall into disillusionment. Shuerger leaves Gideon’s inner conflict over the depressing reality of finding himself manipulated into fighting unjust wars off screen as merely part of his past. Once he begins his training under the sorcerer Ashkelon, there is no fear that he will blunder into horrible, unintended consequences in his enthusiasm. This allows the reader to fully indulge in vicarious battle against evil.

Ashkelon is an equally compelling character and will satisfy any desire for an “antihero”: incredibly overpowered, champion of the Dark, yet principled in his own way. His character serves primarily as a foil for Gideon, and not as the story’s antagonist. Passionate hatred towards the demons and their servants makes him sympathetic, even if that same hatred is directed towards the servants of the Light. His contradictory stances give him an air of mystery. This and the balance of his nature against Gideon’s genuine personality keep his bitterness and frustration from dragging the story into the grimdark genre.

The setting of In Darkness Cast is a fairly typical heroic fantasy setting: a feudal world with monsters and demons, heroes and sorcerers (but not elves, dwarves, etc.). The mythos makes this setting truly shine, though.

Light and Darkness are referenced and generally stand in for good and evil. The Darkness is both literal and figurative here, including things like shadow manipulation, but also corruption and sin. The gods of this world are three demons, who are an improved take on the old Deadly Sins trope, representing the indulgence in and celebration of death, hunger, and pain. Through these they twist and warp even their own worshipers, and torment their victims.

The nature of the Light is more complex, partially due to Ashkelon’s distain for people who claim to follow the Light, but are hypocritical and ultimately allow Darkness to taint their Light. However, it is clear that this Light is aligned with Gideon’s faith in God.

I enjoyed this unique narrative and found it generated a lot of interesting situations.

What is a Hero?

In Darkness Cast presents the reader once again with the common fantasy thematic question on the nature of heroism. Gideon and Ashkelon have differing ideas, although there is enough overlap that they can collaborate on Gideon’s training.

Ashkelon wants a hero to be someone who is not tempted by evil and who has a steady faith; to him a hero is someone who proves the existence of God by overcoming evil without and within. His own apathy towards his fellow man further informs his opinion that the highest priority is saving as many people as possible, even if that means making a strategic choice to abandon allies.

Gideon, on the other hand, wants to save others regardless of personal risk, reward, or worthiness. In this way, he reflects the heroism of Christ, although it is not stated as such in the story.

Where is Your God?

This question is asked several times to various characters of different faiths. The cultist followers of the “New Way” answer that they have thrown off the yoke of gods (even though the demons they previously served approved their new leader) and they themselves are the gods now.

They wield this question as a weapon against followers of the Light and cultists who continue to follow a demon who never appears personally on the battlefield to fight for or save them.

Ashkelon’s entire existence is a demand for the God of Light to prove Himself. The story never delivers a trite, dialogue-packaged answer to this theological question. This isn’t “Christian Fiction” where the unbeliever must be answered in order to convert. Instead, the story allows it to be a difficult issue and wrestles with it.

The conclusion during the climax is that Gideon’s God is with him, giving him what he needs. This is inferred through the narrative and remains open for further consideration as the series continues. It certainly does not flippantly wipe away the rancor and alienation that produced the question.

Check Out In Darkness Cast!

In Darkness Cast delivers an exciting story of good vs evil following strong characters to thought-provoking thematic conclusions. I look forward to the next installment in the Shades of Black series! 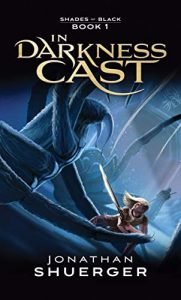 Did you enjoy In Darkness Cast?

Adventure, Fantasy, Reviews
The Brand of the Warlock Review 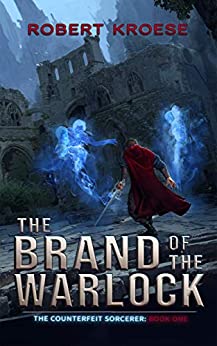 The Brand of the Warlock Review