This Nightland Racer excerpt is shared with the permission of the author. Hope you enjoy!

Reynard “The Fox” Douglas is an outlaw racecar driver who despises the government that jailed him, drafted him, and seized his money.

He’s also the only man who can pilot an experimental nuclear-powered supercar into the Zone, a realm of mists and monsters where nobody gets out alive.

The Zone is expanding…and eventually it will engulf the entire world. At the heart of the Zone is a singularity, a portal into other times and other places.

Transported into the distant future of Earth, Douglas has to fight his way across a landscape of alien cultures and bizarre life forms, in search of an ancient superweapon that can stop a sentient black hole from devouring the Earth.

Ages 12 and up. Contains mild profanity and post-human monsters.

“I came to the Nightland by means which I still do not understand,” said Tao.

“My people were mighty sailors. We sailed the seas of the world-ocean in our sturdy ships that could run before any storm.

“One day, I became sick of the world and nothing was pleasing to me. I resolved to made a waka tiwai, a dugout canoe, with my own hands from the trunk of a totara tree, and to sail south as far as I could go, as one does when one is sick of the world. I would bring nothing but my harpoon, my paddle, a filter for making fresh water out of seawater, and a few odds and ends. I would travel from the Last Island, where the Loneliest Tree grows, to the shore of the Southern Waste, a distance of eight hundred miles. There I would hunt penguins until I was no longer sick of the world, and then I would return.

“On the twentieth day of my journey south, I awoke to find the world shrouded in mist from horizon to horizon. The mist seemed to glow with its own light, and the Sun was nowhere to be found. Not even my sunstone, which operates by the polarization of light, could tell me the direction of the Sun. I paddled for many days, hoping that I was keeping to a straight line, but the mist did not lift or change in any way.

“On the thirtieth day, I came to a barren shore. The shape of the land was hidden by the mist, and there was no sound in any direction. Even the waters were still, undisturbed by any tides. I thought that I must have entered the House of Death, the cave where Whiro dwells and devours the bodies of the dead until he becomes strong enough to break free from the underworld.

“With nothing else to do, I pulled my canoe onto the shore and left it behind. I walked into the mist, into the cold and silent land whose shape I could not see. There was no longer any night or day in this place. I slept whenever I grew weary, setting up my tent and using my body heat to melt snow from the ground so I could drink it. We do not carry great stores of food when we travel, relying on our skill to provide us with wild game. My food ran out after a few days, and there was nothing to hunt. I occasionally found driftwood, and I tried to light a fire to warm myself, but my flint and steel would no longer make a spark, as if its magic had departed.

“After walking for many days in this featureless place, I began to hallucinate. Driven mad by cold, hunger, and the monotony of the silent and featureless mist, my mind began to conjure shapes out of the mist, monsters and beasts and formless things. I slayed many of them with my harpoon, but I still do not know if they were real or only phantoms.

“At last, when I was near death, I emerged from the mist and beheld what lay on the other side. The air was thin and cold, the stars blazed down like merciless shards of ice, and there was no sun in the sky. There was only the Moon, grown terrifyingly close and carved into the image of a cruel and sinister face.

“My lungs labored, drawing in great draughts of air that was too thin and had too little oxygen. I fainted many times, but I always awoke and kept going.

“I was captured by the Machine People. If there is anyone crueler, I do not know of them. They experimented on me and made me as I am now. They intended to program me, to make me like them. But my will was stronger than theirs. I resisted and I escaped.”

“What was the world like, in your time?” said Douglas. “You said something about the oceans rising.”

“The oceans covered ninety percent of the Earth’s surface,” said Tao. “The continent you call North America was divided by a great inland sea. Large portions of the other continents were underwater as well.”

“What happened? Was there a nuclear war? I thought it was supposed to cause a nuclear winter, but some people said it would cause a runaway greenhouse effect instead.”

“No, it was a natural process. It started around half a million years before my time.”

“What happened to Europe? To the United States?”

“Those nations are unknown in my time. What was left of North America was inhabited by wild men.”

“There were brown, red, yellow, black, and bronze men in my time, but there were no men who looked like you.”

“What happened to them?”

“I do not know. There are no records of white men, either wild or civilized.”

“But our cities, our technology. Something must have survived.”

“My time was roughly half a million years after yours. No artifact could survive that long. I don’t know what happened to your people, any more than I know what happened to mine. Your land sunk beneath the waves a hundred thousand years before my time. But my ocean has been gone for longer than that.”

“Maybe they left for another planet,” Douglas said, not listening. “That’s exactly the kind of thing they would do. When one place got too crowded, they set off for new lands where they could live in freedom. Maybe they’re still out there somewhere, on a planet of their own.”

Tao shook his head. “Men cannot live in space. The men of the Fourth Spacefaring Age learned this when they sent manned spacecraft past the edge of the Solar System. All of space is pervaded with death-energy, which they named the Great Pain of Space. Only the emanations of the Yellow Sun, and other stars like it, keep it at bay. Even if a suitable planet were found, how would men reach it? In order to cross interstellar space, they would have to enter a state of living death, or suspended animation. When they emerged from it, they would no longer be human.”

“Death-energy,” Douglas repeated. “But the Sun is gone. What keeps the death-energy from descending upon the Earth and killing everything on it?”

“Only the stored energy of the Sun, soaked up over millions of years by living things, and weakly emanated by the layers of decayed organic material that cover the land and the beds of the oceans,” said Tao. “But even dead hydrocarbons cannot maintain their structure forever. When the last of the Sun’s energy has faded, the cold of space shall descend upon this world, and the things that live in the outer dark shall feast upon the remains.”

“I was sent on a mission. I was supposed to find the singularity and destroy it. But you said it’s impossible.”

“There may yet be a way to fulfil your mission. There may be a way to destroy the Black Sun itself. The Nightland holds many secrets, the ruins of a thousand ancient civilizations. I have everything in here.” He tapped his skull. “In the cybernetic implant the Machine People gave me.”

“They just told you all their secrets?”

“No. I broke into their mainframe room and stole the information. But it’s far from complete. A great deal was left behind in the evacuation of the Lesser Redoubt, which had a library of its own. It is there that we must go.”

Did you enjoy this Nightland Racer excerpt? 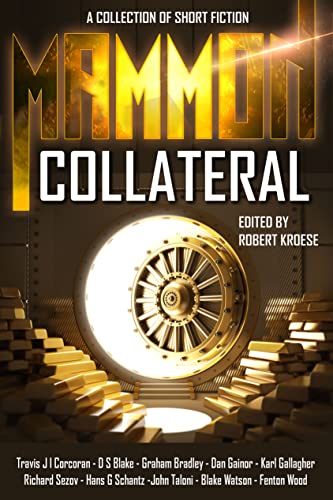