It all starts in the mountain town of Porterville. Twelve-year-old Philo starts a pirate radio station with his friends, and learns that the world is a stranger place than he ever imagined. The Ancient Marauder, the Bright and Terrible Birds, the Mishipeshu, and other creatures of myth and legend populate this enchanting mixture of science and fantasy.

Review: Pirates of the Electromagnetic Waves by Fenton Wood

Here at the Periapsis Press blog, we only post reviews of works we recommend, so you already know I enjoyed Pirates of the Electromagnetic Waves. I encourage you to check it out!

Pirates of the Electromagnetic Waves is a story of youthful ingenuity set in a flavorful science fiction, alternate history world. This enchanting first book in the Yankee Republic series introduces a tone of wonder in discovery and success in diligent work through the application of the timeless boyhood adventure to the science fiction genre.

In a narrative style reminiscent of Mark Twain, Fenton Wood captures a sense of imaginative wonder. Pirates of the Electromagnetic Waves utilizes the best of “children’s literature” realistic fiction, before realism came to mean pessimism. Rather, it means that the events of the story could happen, however improbable they may seem to someone determined to see the worst in the world.

The entertainment value is delivered in the manner of a realistic adventure story: through second-hand pleasure in discovery, the building of something constructive, and success in the pursuit of a clear goal.

In addition to The Adventures of Tom Sawyer, I was reminded of The Swiss Family Robinson by Johann David Wyss and Hatchet by Gary Paulson, particularly the enthusiasm of building something from bits and pieces. Wilson Rawls’s Where the Red Fern Grows also came to mind, but more due to the rich sense of place in nature and in community.

Of course, Pirates is adventure fiction, but not actually realistic children’s literature. It is a science fiction blend of weird fiction, folklore, and alternate history.

The alternate history aspect contributes greatly to the overall tone of the work, but little to the plot in this first story. It functions as a switch that allows the reader, whatever their age, to share in the thrill of discovery and imagination led by the enthusiastic boys.

How much reflects reality and how much is true only within the story? How much is tall tale or misconception either by the youthful heroes or the isolated mountain people? All of the questions spurred by casually dropped details help to capture that sense of wonder and infinite possibility characteristic of the boyhood adventure.

The strong adherence to the expectations of the adventure fiction genre suggest a slight variation in my interpretation of the ending, when Philo stumbles into another world/dimension and the first real sci-fi situation of the story. This, rather than the setting of the story, is the true “alternate history.”

In keeping with the established tone, it isn’t our “real” world, either. The reader can anticipate more interesting things to experience and learn, not the pseudo-entertainment of watching someone else be exposed to our own, all-too-familiar world.

Delivering the delight of discovery is a cast of eager, genuine boys. Their antics in the pursuit of a pure goal require no convoluted life lessons or interpersonal drama to provide thematic commentary on the importance of friendship, hard work, and their own potential.

The themes are developed organically through the events of the story. Representative of this pattern is a scene in which the boys attempt to cross a high bridge via the catwalk beneath and find a section has been removed to prevent people from doing just that. Rather than giving up, the boys devise a solution using the materials they have with them. This solution is daring. It forces the boys to show courage, determination, ingenuity, and camaraderie. When these are diligently applied, they succeed.

Coming-of-age stories too often become mired in the character’s head, over-indulging in the emotions and thoughts that accompany any period of transition. Change is difficult and can be a great catalyst for a story, but it is not entertaining in and of itself. Pirates focuses on the pleasure of the moment for these boys, keeping the story moving with a positive tone even as time passes and friends move away.

Pirates of the Electromagnetic Waves is an engaging tale of nostalgic adventure in a fantastic world. It sets the expectations for the rest of the Yankee Republic series to continue the exploration with sincerity and excitement! 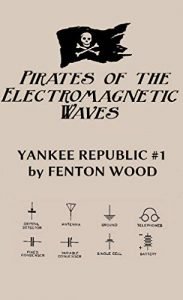