Civilization is frozen in a savage age. For one young hunter named Alden, power and survival are one and the same. The ancient evil that once ravaged his village and murdered his ancestors has returned. At the same time, politics hurls Alden into gladiator pit battles for control of the throne.

When Alden takes possession of a cursed sword promising untold power, the hunter is determined to save his people by slaying every giant monster standing between him and the throne. But the angry ghost trapped inside the blade has other ideas.

The first entry in a thrilling LitRPG light novel series!

Here on the Periapsis Project, we only post reviews of works we recommend, so you already know I enjoyed Ghostblade. I encourage you to check it out!

Ghostblade is an adventure-packed light novel in the shōnen vein that delivers a unique and entertaining spin on some of the best elements of that genre: tenacious characters, dynamic action sequences, and thematic elements of diligence and community. Beautifully illustrated by Ashion. This compelling first installment of Adam Lane Smith’s The Savage Hunters series has certainly whetted my appetite for more!

Alden is a virtuous main character with a desire for self-improvement, grounded in a strong sense of community. While this is a common character trope in the genre, Smith’s execution, particularly in tying Alden’s character development to a stronger thematic message about what it means to be a man, lends Alden a more mature tone than is typical among shōnen leads.

I found myself rapidly gaining a respect for the young hero. He aspires to become a better hunter in order to protect his village, and it is clear that the needed growth is in experience and not in repentance or common sense. This avoids some of the cringy scenes typical of young protagonists. Alden might make poor decisions, but they were always from a pure motivation that I sympathized with, never from internal flaws or faults inflated for cheap character improvement down the line.

As a result, Alden comes across as a lifelike character, and it is easy to believe that his peers respect and trust him in a leadership position.

This light novel is chalk full of captivating action sequences. Each conflict is vividly described, with all the involved characters taking active roles against the monsters that they face. Even in the gladiator-style tournament, the battles did not run together monotonously. They were all fresh, through different beasts, tactics, and characters.

Alden’s fights, in particular are always multi-faceted. They incorporate conflict on multiple levels, from the basic struggle for survival in the arena, to the political competition for the throne, to the over-arching clash of order and chaos.

Unfortunately, the complex nature of these conflicts can make the handful of scenes starring other teams and their battles a bit tedious. Although this, too, is a common element of shōnen-style tournaments, I have always found them to drag on a bit too long. Smith successfully hooked me into his story; I was invested in Alden’s team and their objectives. That made it hard for me to find interest in the battles of the other characters. Take that with a grain of salt, however, because I am not a sports fan in real life, either: I never could see the appeal in March Madness, for example.

I enjoyed Smith’s choice to incorporate an RPG-based levels system into his world. I thought the LitRPG concept was well executed and worked beyond the simplistic “give the reader a quick understanding of everyone’s relative power.”

Not only did the clear levels give a sense of objectivity to the character’s abilities, but they also emphasized their need to improve if they wanted to be able to protect their community. In this way, they raised the stakes from the very beginning. Balanced against the character development as they were– particularly Alden’s diligence and desire for self-improvement – meant that, even though the hunters’ levels were not high, I believed they had the moxie to succeed.

Furthermore, the skill trees inserted an additional sense of hope, particularly to the over-arching conflict against the ancient threat, by offering the characters opportunities of growth tailored to combat it. They might not be ready for that just yet, but it offers a tantalizing promise of more epic action to come!

Ghostblade has a very polished feel to the whole work, with a clear attention to detail from plot and character to grammar and word-flow. The setting is no exception here.

Often a story’s setting, particularly in fantasy genres, is more a consequence of plot or an exercise in artistic description than a functional aspect. While I can’t claim to know if Smith intended to put his setting to work in the service of storytelling, it certainly came out that way.

The story has three major settings: the village, the corrupted forest, and the city.

The Village – Order and Vigilance

The early descriptions of the village and surrounding terrain convey nobility in simplicity and hard work. Here is the first glimpse we are given of Alden’s home:

“The front door made of dense, woven wool opened onto a dirt floor and a large rectangular hall.”

This seems relatively straight-forward, and yet it is representative of a consistent picture Smith creates of this setting. Handicraft permeates the scene, from the woven front door to the bone structure of the house itself. Things may be simple, from the dirt floor to the open space, but there is a strong connection between the people who live there, even though none are present in that first scene. Someone made the door, someone – ancestors no longer even living – built the house. A strong sense of heritage exists – a legacy of hard work manifested in every item in Alden’s home.

This generates a sense of belonging, further emphasized by the oversized dinner table and the meal set aside for Alden, and contributes to a feeling of security. This village is a safe place, with a strong wall and competent hunters standing watch. So safe, in fact, that none of the buildings have actual doors.

Not only does this accentuate Alden’s character as we are first introduced to him, but it also sets up the major conflict of the series: the return of the Scourge that nearly drove the village to extinction. The community’s safe and connected lifestyle contrasts sharply with the corrosive and invasive nature of the enemy.

“Looming skeletal trees seemed to reach for the band from the corner of Alden’s eye. Every so often, the abrupt cawing of a raven would tear through the forest, and the hunters would jerk in their saddles.”

The second setting further emphasizes the dichotomy between order and chaos. Where the village represented the safety, security, and happiness possible within order (particularly demonstrated by the wedding), the forest embodies the constant strife, fear, and loss of self that is perpetuated by chaos.

Alden and his friends must be constantly on guard because the Scourge is not only physically corrosive and viscerally repugnant, but also threatens them on a spiritual level: “The Scourge already burned in Jincra’s flesh and spirit to a degree which terrified Alden.” While it is yet unclear exactly how this spiritual aspect might manifest (assuming the physical corrosion was halted), it is easy to imagine how it could jeopardize the relational security within the community.

Note: I think it is fair to categorize this conflict as order vs chaos, at least in this first installment in the series, rather than the typical good vs evil. Although the characters interpret the corruption as having a malicious intent towards them, I do not see it depicted in this story as having a particular direction to its consumption. It seems more like an invasive sickness that must be driven out before it reaches a vital organ, as it eventually would if left to its own devices.

The third setting, Ceralahn City, stands in contrast to the village in a different way. While the village was a safe and secure place, it was not so by chance. The community was constantly vigilant, posting lookouts against outside threats and intentionally working to pass on their traditions and beliefs to the next generation – safeguarding against a different kind of chaos.

However, the city, on the other hand, is not a place characterized by simplicity and a tight-knit community. Smith never faults the city for this, necessarily. There is no a commentary on rural vs metropolitan. Rather, the city seems to represent a society distracted by various affairs. Its people reject the threat of an outside evil, preferring instead to believe their own events, such as the political tournament, are the driving force of all motivations. The people are divided into their own tribes and factions; therefore, the city lacks any sense of unity, even in something as simple as clothing, which is always richly described. Furthermore, the ending (without going into detail) reveals that they are blind to the chaos unfolding within their own walls.

Even Alden and his team must constantly remind one another that their true purpose is not necessarily to win glory and political power through the tournament, but to gain allies against the true threat that they face.

Smith’s skillful composition of setting puts it to work for the story in both plot and thematic avenues. I know I’ve spent a lot of words here, but it was a treat for me to discover such a uniquely integrated setting!

Ghostblade is a brilliantly entertaining adventure, with compelling characters, vivid action, and subtle setting all in service to an engaging story. Accessible whether you are familiar with light novels or not. 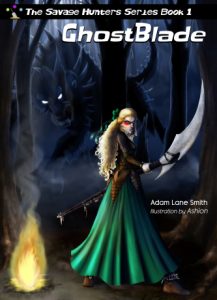 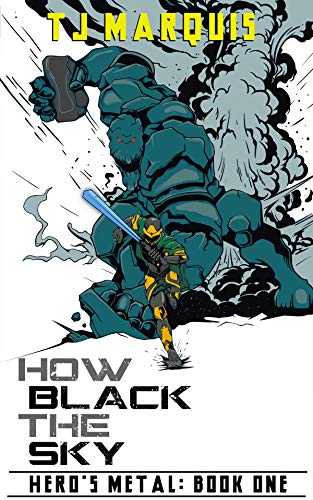